Merry Christmas and a Happy Healthy New Year To All

Well it’s been quite a while since I’ve been up to posting on here. Sorry about that, but what with viruses, stressful events, christmas preparations and a much needed eyesight test I haven’t been able to get on here much at all!

Fortunately I am now (fingers crossed) virus free! Some of the stressful events have eased a little. And I have new glasses so can see properly again – always advantageous 😉

Christmas preparations are under way, planning for the unknown this year – we’re not sure who may or may not be coming, so got lots of food ‘just in case’! Pretty much all the presents are wrapped, cards written, decorations are up. Just the baking, cleaning and hopefully a bit of resting left to do before the busy day!

I’m not managing this illness as well as I have been – seem to be doing too much, resting to recover and then doing too much again! I need to slow down, rest more and re-learn that odd strange word ‘NO’ when people ask a favour. But this time of year it’s so difficult to do that, especially with everything else that’s been going on for my family this past month.

I find having a daily routine helps me manage a lot easier, but due to circumstances I haven’t been able to maintain that much of a routine these past few weeks which has made me worse. Oh well at least I am identifying where I am going wrong, I just need to find a way of adapting and changing things so that I am able to improve!

That’s all for now folks, if I don’t post again before (which I doubt I will) I hope you all have a Very Happy Christmas and Wish You All The Best for 2013, I Hope it Brings A Wealth of Health and Happiness to You All 🙂

Results Are Out Early!!!

In My Open University Journey, Studying

Well I’m posting here again earlier than expected, my results for DB123 You and Your Money: Personal Finance in Context were due out ‘by December 14th’ but were released early – 4th December!!

I am pleased to say I passed!! 😀 Which I am very pleased with especially as I completed that final assignment whilst I was pretty ill and sleep deprived. I was only 5 marks off getting a distinction grade as well! Not that it matters to the classification of my degree at this stage but it is a little frustrating to have been so close!

Still over the moon with the fact I passed as I wasn’t all that confident that I had written anything near good enough to pass let alone get the score I did!

This means I have gained a Certificate in Business Studies on route to my degree!

Oh well it made my day on Tuesday, brightened an otherwise pretty rough day or make that week so far! The cold is seriously getting to my joints at the moment and I’m in a fair amount of pain constantly. I’m hoping come January when I start T215 Communication and Information Technologies I will be in less pain and a little better.

Next week I have my Disabled Students Allowance (DSA) equipment being delivered and set up to make studying my next course that bit easier!

I’ll keep you updated with how things go.

And it gets colder…

Well this week hasn’t exactly gone to plan, I had hoped to be able to start wrapping christmas presents and get organised but that hasn’t happened yet.

It seems as usually happens, my trip out at the weekend got me out in the open to welcome another virus into my body. So I have spent most of the past week under a duvet resting beating off a cold like virus. Today I am feeling a little better, on the road to recovery I hope!

As I’ve felt a little better today I finished writing my christmas cards, so now all I need to do is get them posted when I’m able. I’ve been writing them for about a month now taking my times only doing a couple each day so I don’t do too much. I’m so glad I’ve finished now. Next it’s the present wrapping!

The weather is getting colder and bleaker now, in fact they forecast wintery showers this weekend. Of course this isn’t helping me as my joints are getting worse in the cold weather but I am keeping a positive attitude and trying to makes sure I don’t dwell on it.

I’m looking into getting a book on living with chronic pain which gives you tips on mindfulness and meditation to help cope with it. I figure it’s worth a try, right now I’m open to anything which could help but doesn’t involve taking painkillers.

Well here’s hoping for a good weekend and a better week next week! Hope everyone reading this is as well as possible.

Recovering From An Exciting Day Yesterday!

Well it’s been a week since I last posted, can’t quite believe that how time flies when your just about managing to go about everyday living!

This week has been spent resting, writing christmas cards, resting, knitting, resting, putting music to mp3 format, resting….I think you get the picture!

I’ve been a bit better this week and able to do a bit more, however still having to take things slow and rest quite a lot. I mean what I just listed sums up all I did Monday-Friday and for me that is busy at the moment, it takes a lot out of me to do all that. Whereas to most people that looks like a days work, possibly without so many rest periods though!

Yesterday was a brilliant day, I was up really early (well for me anyway 7:30am is early!) and in town in the wheelchair by 9am to get some christmas shopping done. I managed to get half my xmas shopping done, also treated myself to a new handbag but I think I’ve earned that treat!

On the way home we went up Moulsham Street where they were preparing for the Christmas Light switch on there. And saw the Coca-Cola Christmas Truck which was there as part of their tour of Britain. It was being washed ready for the Light Switch on later that day, but we stopped to take some pictures of it. Whilst doing that one of the lovely guys setting it up came over and said if I wanted my picture taken with the truck they’d be moving it into position and have it set up by 12pm. Unfortunately it was only 10:45am and I was freezing, quite tired and in a bit of pain. My Mum and I explained that I wouldn’t be able to wait around for that long because I suffered from M.E. which he took on board and called one of the other people helping him set up over, got them to get the plinth you stand on for the picture and put it next to the truck. He also got the signpost out and helped me up onto the plinth with my walking stick so he could take my picture of me with the Coca-Cola Christmas Truck, just like everyone else would get the chance to have later in the day! Here’s one of the lovely photos: 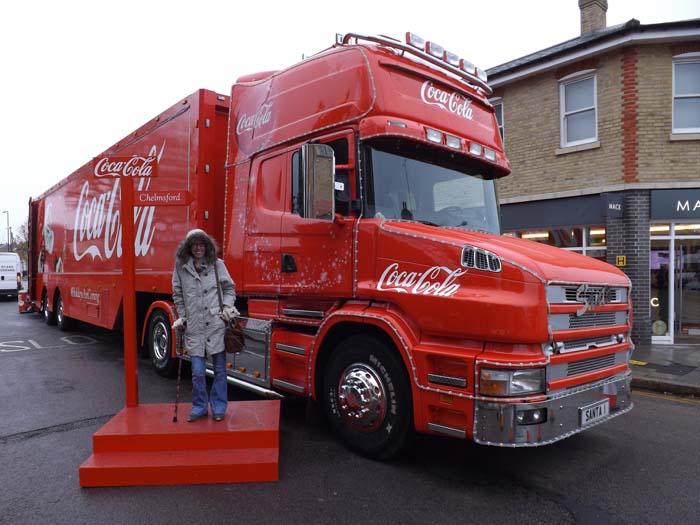 The reason for sharing that story is because it restores your faith in human kind, I don’t get out much so when I do I like to make the most of the opportunity, by doing what he did yesterday that guy made my trip out all the more special and I have an iconic photograph to remember it by and look at whenever I feel down or have been stuck in the house for weeks or months on end because my body will not allow me to get out and enjoy myself.

I don’t know the guys’ names who were setting up/running the Coca-Cola Christmas Truck in Moulsham Street Chelmsford, yesterday but if you’re reading this and know them or are those guys I would like to say a massive THANK YOU for making my first trip out in months that little bit more special. It made my day, and also makes dealing with the pain and exhaustion I am feeling today that little bit easier because looking at that photo I remember how good it felt to be out!